Some Nature Spirits are Pure Evil

The British Isles are famous for evil elementals as you’ll find out in this post. Scary evil elementals are known to lurk and terrify unsuspecting people. Most individuals or paranormal investigators don’t even realize that there exist in the world, evil-minded nature elementals.

Overall, elementals are nature spirits that have existed long before humanity. Most of these supernatural beings are relatively harmless. Alarmingly, folklore claims a kind of elemental that is quite vile and lurks near ancient ruins and burial mounds. Britain, full of ancient burial sites, is the perfect place these these kinds of elementals.

Furthermore, elementals such as these often have a bizarre appearance. Frequently, these creatures are usually a mixture of animal with human-like facial features. Not only that, but parts of them are reported as looking like decomposing flesh.

For example, the evil kinds of elementals exude an incredibly bad odor. Additionally, another trademark of an evil elemental is its piercing eyes that look incredibly malevolent and follow your every move.

The British Isles are Famous for Evil Elementals

The British Isles has had its share of elemental sightings and elementals that haunt particular locations over the centuries. For example, once such place is Leap Castle in Ireland.

Geoffrey Hodson described an encounter with a classic Elemental in 1922. This sighting occurred in the hilly Lake District in North West England. This story from the book “Ghosts” by Roger Clarke, made my hair stand on end.

“After a scramble of several hundred feet up a rocky glen we turned to one side on to the open fell where it faces a rock crag. Immediately on reaching the opening we became aware, with startling suddenness, of the presence of a great nature-deva; who appeared to be partly buried the hillside.”

“Moreover, my impression was of a huge, brilliant crimson bat-like thing which fixed a pair of burning eyes upon me.”

“Additionally, the form was not concentrated into the true human shape but was somehow spread out like a bat with a human face and eyes, and with wings outstretched on the mountain-side. Shockingly, as soon as it felt itself observed, the beast flashed into its proper shape as if to confront us. It fixed it’s piercing eyes upon us, and then sank into the hillside and disappeared.”

Peter Underwood on the Topic of Elementals

Peter Underwood (1923–2014), is one of my favorite authors on ghosts. As a paranormal researcher and prolific writer on spirits of all kinds, Underwood asserts that elementals are ‘ghosts connected to burial grounds, and are primitive race-memory manifestations.’

In contrast, new millennium ghost hunters might mistakenly place malevolent elementals into the category of demons. Above all, possessing a human is the prime goal of demons. Most importantly, no elemental that I’m aware of has been known to attempt to possess a human being.

“To illustrate, Elementals are exceedingly primitive entities: they squat in a simple pale, and to stare at one. Furthermore, even in the dusk (though it seems they can appear in the fullest horror of daylight), to see one is instant insanity.”

Arthur Balfour (1848–1930), former Prime Minister of England, had an encounter with an evil elemental. Balfour had a profound interest in psychic phenomena. Of courses, he kept this quiet due to his position, and not wanting to put his reputation in question.

He once accompanied a group to witness an elemental that was said to occasionally materialize in an old manor house in Somerset.

The story goes that the elemental did appear on that occasion and that one of the party gazed too long in the face of the creature. It’s claimed the man was never the same.”

Although accounts such as these creatures may seem absurd and fantastical, primitive indigenous peoples through the ages have believed in the existence of elementals, both benign and malevolent.

In today’s world, many shamans, Nature Wiccans, and a smattering of paranormal researchers accept the reality of these evil creatures as truly existing.

Evil Elementals Are a Worldwide Phenomenon

Evil elementals are not just part of the mythology of the British Isles. Countless locations worldwide have reported strange and terrifying half man, half animal supernatural creatures. And, the phenomenon attributed to them is eerily similar.

Moreover, Native American mythology mentions a dreaded creature that fits the description of an evil elemental. Surprisingly, early settlers in America have left accounts as well.

The Legend of the Leap Castle Elemental 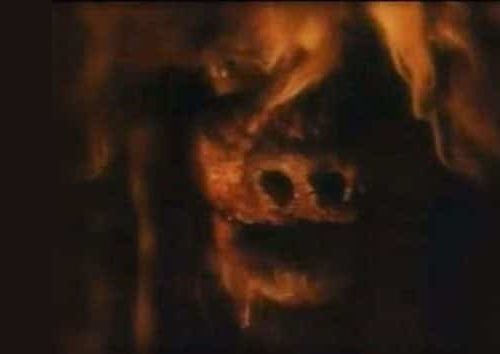 Leap Castle’s Chilling Tale of “It”

Read the tale of the Leap Castle Elemental Haunting. This ancient and evil elemental has even been given a name.

The remains of Leap Castle are nestled in Coolderry, Ireland, high atop a crag. Built in the 14th- century, Leap Castle in is said to house its own version of an elemental spirit nicknamed, “IT”.

Notably, the appearance of “IT” was first documented around the 13th-century by a local priest. It seems that  subsequent generations of families at Leap Castle, have had to deal with the infamous and vile elemental.

According to folklore and legends, some elementals are malevolent, terrifying, and unpredictable creatures that have existed long before mankind. These types of elementals are frequently connected to ancient places of burial. Although more rare than ghost sightings,  it’s said that sighting an elemental  doesn’t bode well for the witness.

By the early 20th-century, Leap castle was purchased by Jonathon and Mildred Darby. Mildred Darby had an avid interest in the occult. More specifically, she experimented with the Ouija board and similar activities. This was not all that unusual as dabbling with the occult was a popular pastime for well-to-do and aristocrats during the 19th to early 20th centuries.

Sighting of the Terrifying Elemental of Leap Castle

“I was standing in the gallery looking down into the main hall when suddenly I felt something by me. The thing I saw was about the size of a sheep, thin, gaunt, and shadowy in parts. Its face was human, or to be more accurate — inhuman in its vileness. The lust reflected in the “IT’S” eyes, which seemed half decomposed in black cavities, stared into mine. The horrible smell which before offended my nostrils, became 100 times more intensified and came up into my face filling me with a deadly nausea. It was the smell of a decomposing corpse.”

“It” Not Sighted in Decades

Although Leap has passed to other owners since, “IT” has not been sighted since Mildred Darby’s unfortunate encounter in 1908. However, owners after the Darbys complained they experienced bouts of bad luck when renovating Leap Castle. There have been serious falls resulting in broken bones and similar accidents.

In the last few years, the Leap Castle Elemental has remained fairly quiet. The present owners renovated Leap Castle enough to showcase it to tourists. People now rent Leap for wedding and christening ceremonies held in the High Chapel. Perhaps happier times have caused the troubled spirits of Leap Castle to vacate. Perhaps not. As an update to this post, there have been recent sightings of this hideous elemental.

This infamous haunting is not the run of the mill ghost. Rather, it’s the evil kind of entity that inhabits old buildings and lurks around ancient burial grounds. Why the Leap Castle Elemental took up residence in this historic place is not known. However, the eyewitness accounts verify that something evil and unspeakable walked the stone halls of Leap Castle.

You’ll most likely never encounter an evil and strange-looking elemental. That is, not unless you prowl ancient gravesites. Nonetheless, many do believe that they exist even in today’s world. If you do happen to encounter an elemental such as this, my best advice is to back away slowly and then run!

Get the Complete Premier Pathways to Clairvoyance, Spirit Attachments & How to Ghost Hunt PRO Courses Combined.