Leap Castle Is Home to Ireland’s Most Infamous Evil Elemental

The Chilling Story of “It”

The legendary Leap Elemental has haunted Leap Castle for decades.

The remains of Leap Castle are nestled in Coolderry, Ireland, high atop a crag. Built in the 14th century, Leap Castle in is said to house its own version of an elemental spirit nicknamed, “IT”. The appearance of “IT” was first said to have been documented around the 13th century by the local priest. It seems that generations of families at Leap Castle have had to deal with the infamous “IT” elemental.

According to folklore and legends, some elementals are malevolent, terrifying, and unpredictable creatures that have existed long before mankind. These types of elementals are frequently connected to ancient places of burial. Although more rare than ghost sightings,  it’s said that sighting an elemental sighting does not bode well for the witness.

“I was standing in the gallery looking down into the main hall when suddenly I felt something by me. The thing I saw was about the size of a sheep, thin, gaunt, and shadowy in parts. Its face was human, or to be more accurate — inhuman in its vileness. The lust reflected in the “IT’S” eyes, which seemed half decomposed in black cavities, stared into mine. The horrible smell which before offended my nostrils, became 100 times more intensified and came up into my face filling me with a deadly nausea. It was the smell of a decomposing corpse.” 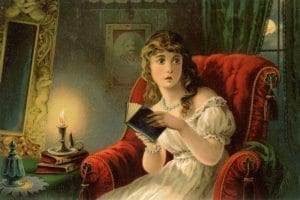 Anyone who sees the Leap Castle Elemental is traumatized by its terrifying appearance and stench.

“It” Not Sighted in Decades

Although Leap has passed to other owners since, “IT” has not been sighted since Mildred Darby’s unfortunate encounter in 1908. At least none that are documented. However, owners after the Darbys complained they experienced bouts of bad luck when renovating Leap Castle. There have been serious falls resulting in broken bones and similar accidents.

In the last few years, the Leap Castle Elemental has remained fairly quiet. The present owners renovated Leap Castle enough to showcase it to tourists. People now rent Leap for wedding and christening ceremonies held in the High Chapel. Perhaps happier times have caused the troubled spirits of Leap Castle to vacate. Perhaps not. As an update to this post, there have been recent sightings of this evil elemental.

How to Do Psychometry Successfully