Past Life Vision of Battle at Gettysburg

Shocking Vision of Dying a Past Life

Past life vision of Battle at Gettysburg recounts how I saw a vision of myself as a young officer dying in 1863. Perhaps you’ve experienced something similar.

Do you have dreams or waking pictures in your head of other time periods you can’t seem to explain? Additionally, do you sometimes wonder where a particular habit, fear, or a sudden reaction to something that seems out of character?

More importantly, have you ever had a weird feeling of Deja vu when reading a book or watching a movie? If so, you may have experienced a fleeting past life recall. In fact, spontaneous past life flashbacks have  happened to me at least four times in my life.

First off, besides being a Psychic-Medium and Hypnotherapist, I’m an avid history buff. I enjoy watching historical movies. However, when the vision occurred, I’d never before seen a film about the Civil War Battle at Gettysburg, Pennsylvania.

When the part about “Pickett’s Charge” came, I immediately felt an unaccountable sadness. First off, not because of the thousands of lives lost, but because somehow, I knew I’d been there in the actual battle!

Surprisingly, like a video playing in my head, I suddenly saw myself on horseback. I was a young man with shoulder-length blond hair and wearing a flowing mustache. As I rode, I could feel my sword bouncing on my leg on my left side.  As a matter of fact,  my uniform was greyish in color, and the top was a crossover with shiny buttons down one side. I was hot, sweaty, and itched horribly from the woolen uniform.

Significantly, I seemed to be feeling a great urgency mixed with anxiety about a battle ready to commence. Eventually, I saw myself galloping up and down a long line of foot soldiers and yelling orders. Without a doubt, the scene was sheer chaos and men began shouting as the regiment began to advance.

Finally, my next impression was after the line of soldiers began to move forward. It seems there occurred some loud explosions near me and then nothing. As quickly as this mini-movie came into my head, it was gone.

What Skeptics Say about Past Life Recall

Frequently, skeptics of past lives claim what people remember in a past life regression are probably false memories or a confabulation (a false memory).

Quite the contrary, after conducting numerous  past life sessions with clients, the lifetimes’ many people recalled were exceedingly detailed and highly emotional.

Moreover, some individuals expressed sensing distinct smells, touching things, and even what the weather was like. Significantly, for others, the life recalled was highly disconcerting when they discovered that they were another gender or living in a place or time they would have never imagined. 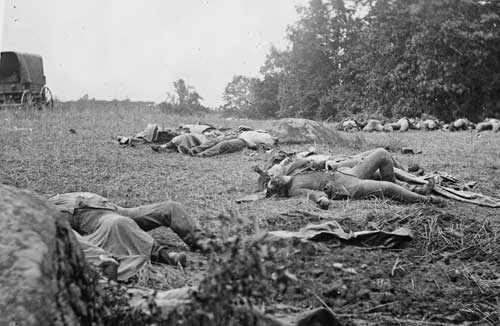 Field of dead at Battle of Gettysburg in 1863.

Books about Past Life Recall

There are several authors such as Dr. Bruce Goldberg, Dr. Brian Weiss, and Ian Stevens who’ve done extensive research and written powerful books on the topic of past lives. Carol Bowman has written an eye-opening book about children and their past life memories.

America’s Edgar Cayce (1879 – 1945), revealed much about past lives in his famous Life Readings. In fact, he spoke of the many gifts and talents people bring forward from past lifetimes, which when remembered, could be put into practical and spiritual use in the current life experience.

Furthermore, as Cayce contended, we are the sum total of all our past lives.

Remembering who you were, where you’ve been, and what you’ve previously experienced is not only interesting, but it also helps you to better understand your current circumstances and perhaps, even heal your life. Furthermore, you’ll be able to see the people that you’ve been with before and possibly heal relationships with new understanding and greater compassion.

People Should Get to View a Past Life or Two

I believe everyone should undergo hypnosis with a qualified hypnotherapist to explore their past lives. Why? Because you’ll better understand your soul’s migration from lifetime to lifetime.

Also, you’ll gain some understanding about the role that karma plays in how lifetimes were lived. You may even come to know that this is not the only lifetime you’ll experience and that you have the opportunity to come back time and time again to perfect your soul.

I’m not sure why this spontaneous vision of being a soldier on the last day of Gettysburg happened when it did. Perhaps, because I was very relaxed and not thinking of anything, in particular, I had unconsciously placed myself in a neutral state of mind where the memory could surface as I was watching a scene from the re-enactment.

For me, I now know why fireworks exploding right above my head frightened me as a child. I finally realized fireworks remind me of the sound of artillery exploding overhead in battle.

I now understand why I’ve lingered in front of unidentified confederate soldiers grave sites when visiting the South. And, beyond a shadow of a doubt, I know that I will live again after this life!

*Pickett’s Charge was an infantry assault ordered by Confederate Gen. Robert E. Lee against Maj. Gen. George G. Meade’s Union positions on Cemetery Ridge on July 3, 1863. The charge is named after Maj. Gen. George Pickett, one of three Confederate generals who led the assault under Longstreet.

It was the last day of the entire 3-day battle at Gettysburg during the American Civil War. Its futility was predicted by the charge’s commander, Lt. Gen. James Longstreet and it was arguably an avoidable mistake from which the Southern war effort never fully recovered.

Get the 3-in-1 Discount Bundle!

Who Are Your Many Spirit Guides?