In 1849, sisters Kate and Margaret Fox began the Spiritualist movement of communicating with the dead. Read how this craze swept through America and Europe. Ultimately, this pseudo-religious movement proved to be one of the most popular fads of the 19th century. This craze involved contacting the spirit world, which until then was not an activity religions tolerated.

Due to the profound amount of publicity, the girls received for their amazing abilities; now everyone wanted to communicate with spirits. In fact, it was so popular, the mania quickly spread to the British Isles and beyond.

How the Craze Began

In 1847, the Fox family moved to Hydesville, New York from Canada. Shortly thereafter, the younger girls started hearing rapping noises in their room. Like wildfire, stories soon circulated about mysterious rapping and banging sounds going on in the Fox home. Clearly, the Fox parents believed the sounds were made by restless spirits. Soon thereafter, the daughters, Catherine (Kate ) and Margaret, devised a way to “talk” with the spirits.

On the evening of March 31, 1848, the two youngest daughters, Kate (11) and Margaret (15), got the idea to pose questions to the spirit. They wanted to see if they could get an intelligent response. The girls would snap their fingers a certain number of times. A spirit, the girls called, ‘Mr. Splitfoot’, responded with the same number of raps.

Next, the girls asked yes and no questions to find out why the spirit was present. Interestingly, they did this by devising a method of communication by counting the number of raps a spirit made in answer to questions. To add to this, each letter of the alphabet had a certain number of raps associated with it which eventually spelled out words and ultimately sentences.

Neighbors poured in as the girls continued to interact with Mr. Splitfoot. Mr. Splitfoot, through a series of knocks, tells a chilling tale that he’d been a peddler who was murdered in the house. He went on to say that he was not at rest because his remains were buried in their cellar. 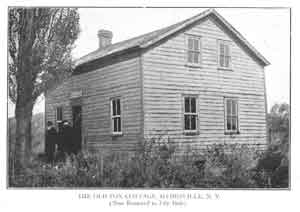 As word spread of the phenomenon, the curious came from far and wide to witness the supernatural demonstrations. Clergymen and layperson alike became convinced the girls were genuinely communicating with a spirit.

Communicating with the afterlife continued for several years. Fueled by their success, in 1850, Kate and Margaret, along with their older sister, Leah as chaperone, traveled to New York City. They begin holding demonstrations (soon dubbed séances) and were an immediate sensation. Of course, a fee was charged for the public displays, and the girls started reaping substantial financial gains.

Soon the Girls Were Celebrities

The established elite and well-known literary figures took the sisters seriously. Then renown Horace Greeley, founder and editor or the New York Tribune, was convinced of the authenticity of the séances and stated publicly in his newspaper that he believed in the Fox sisters’ spirit demonstrations.

With this solid endorsement in tow, the three Fox women began touring the country. Subsequently, the movement now called Spiritualism, became the rage.

Spiritualist Churches Came Into Being

At the time, the new Spiritualist belief for anyone having the ability to communicate with the dead was virtually unheard of. However, attitudes were changing. The Age of Reason had swept away the superstition and condemnation by the Catholic Church against anyone professing to make contact with the Spirit World. The 18th century heralded a time when it was safe to practice Spiritualism without facing horrific consequences. However, spiritualists soon cloaked their activities under the guise of a church-like setting to silence naysayers and religious institutions fervently against the idea of talking to dead people.

In 1871, Kate Fox visited England where the first Spiritualist Church was established in Keighley, Yorkshire in 18153. Margaret soon traveled to England to be with her sister.

I was holding the medium’s two hands in one of mine, while her feet rested on my feet. Paper was on the table before us, and my disengaged hand was holding a pencil. A luminous hand came down from the upper part of the room, and hovering near me for several seconds, took the pencil from my hand, rapidly wrote on the sheet of paper, threw the pencil down, rose above our heads, gradually fading into darkness.

Additionally, Kate was tested by a news correspondent. Interestingly, the correspondent wrote that he’d attended a demonstration by Kate. Specifically, before the session commenced, he checked that her hands and feet were firmly secured. Allegedly,  this prevented Kate from artificially producing the rapping sounds. The correspondent further stated that he’d  given Kate every test conceivable, but upon examination of her surroundings, no evidence of fraud was detected.

By the mid-1860’s, the stress of publicity and performing had driven both sisters to drink. Clearly, broken, Kate returned to the United States in 1885. Sadly, three years later her children from her marriage to H. D. Jancken, an English Spiritualist, were taken from her because of her excessive drinking. Shortly after that, Margaret, who by this time was also an alcoholic, and in great need of money, publicly admitted that the spirit-rapping had all been a hoax. Allegedly, she and Kate had hoaxed it, as a prank.

The confession outraged devout Spiritualists and skeptics felt smugly vindicated. Due to this, Margaret, feeling shamed and still in need of money, soon retracted the confession. Margaret soon returned to Spiritualism as her only means of making a living. Unfortunately, both sisters struggled with poverty for their remaining years.

Spirit Communication was the Internet of Its Day

The appeal of Spiritualism was strong and practiced in many American households. Average homes and even the White House frequently held séances. Mary Todd Lincoln, wife of then-President, Abraham Lincoln, became a fervent believer in contacting the dead. Having lost her beloved son, Willie, she invited popular mediums near the Washington D.C. area to conduct séances. Rumors abounded that Abraham Lincoln himself attended some of the sessions, but this isn’t verified.

Queen Victoria of England also held frequent séances to contact her beloved Prince Albert, who’d died from typhoid fever. When Victoria died, her oldest daughter burned all of her mother’s journals to hide this fact from historians.

Grieving families were also high in the ranks of its devotees. Many were desperate to communicate with loved ones who had died. Now, it seemed, they had a way to do so.

The Craze Reaches Zenith in WWI

Countless families during the American Civil War saw their men go off never to return. Shockingly, images of dead soldiers after battles were published in newspapers. After each battle, photos showed that loved ones had not only died in overwhelming numbers, but horrifically. The surge in spiritualism during this time, and later during the first World War, was a way for grieving families to attempt to find solace.

As a consequence of speaking to the departed becoming lucrative, dozens of imitators started giving spirit readings as the movement quickly spread. Most of these “new mediums’ were hoaxers and dupped many grief-stricken souls out of their money. It became so scandalous that many of these fake mediums were taken to court and prosecuted.

When Kate and Margaret Fox devised a way to communicate with their resident spirit friend in 1849, they had no way of knowing the ensuing repercussions. Their public demonstrations not only changed their lives, but drastically changed how the Western world viewed communication with the dead. Whether the sisters were authentic or just out and out frauds, we’ll never know.

How I Became a Professional Psychic Medium

What Is Rescue Mediumship?

Your coupon code is valid for
We use cookies to ensure that we give you the best experience on our website.OkNo
<!-- This website is like a Rocket, isn't it? Performance optimized by WP Rocke