Do you believe that you’ve lived before? Jeffrey Keene does. Jeffrey Keene is a decorated retired Assistant Fire Chief of Westport, Connecticut. Following the destruction of the World Trade Center on September 11, 2001, Keene was part of an inspection of “Ground Zero” with a group of firefighters. This group, known as Rescue #1, had tragically lost eleven members of their own unit that day.

Keene Stumbles on His Past Life

In May of 1991, Keene and  his wife vacationed in Sharpsburg, Maryland. This is where the second battle of Antietam was fought in 1862.

Hearing about the history of the area, Keene felt compelled to visit the historic battlefield. Although he’d never read a book on the Civil War, or had an affinity for that time, he could not understand the strong compulsion to see it.

Battle at The Sunken Road

At a particular landmark called The Sunken Road, Keene happened to listen to an audiotape narration of events that took place there in 1862. According to the narrative, some of the Southern troops participating in the battle included The Sixth Alabama Regiment which was commanded by a Colonel John B. Gordon. As he walked along the old farm lane, Jeff unknowingly strolled into the area that had been occupied by Col. Gordon and his men. Keene writes of his immediate reaction:

A wave of grief, sadness and anger washed over me. Without warning, I was suddenly consumed by sensations. Burning tears ran down my cheeks. It became difficult to breathe. I gasped for air, as I stood transfixed in the old roadbed. To this day I cannot tell you how much time transpired, but as these feelings, this emotional overload passed, I found myself exhausted as if I had run a marathon. Crawling up the steep embankment to get out of the road, I turned and looked back. I was a bit shaken to say the least and wondered at what had just taken place. It was difficult getting back to the car because I felt so weak. How could I explain it this? I did not have any answers– just questions. Was I there in a past life?

The Fallen Soldiers at the Sunken Road, Civil War Battle at Antietam, 1862

Another Coincidence Seems to Confirm a Past Life as John B. Gordon

Another coincidence was when Keene picked up a magazine on the civil war which contained an article on the 2nd Battle of Antietam. As he read the article, Keene experienced similar emotions to what he had felt at sight of The Sunken Road. Inexplicably, his eyes suddenly welled up with tears.

The article went on to describe the wounding of a John B. Gordon in the battle. Gordon, part of The Sixth Alabama regiment, was struck with shrapnel in the left arm, the right shoulder and twice in the right leg before collapsing from a loss of blood. 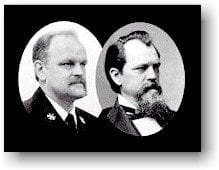 Keene writes of what happened next. “I turned back to the page with the picture of the Sunken Road, and on the page across from it was another picture. This time a chill ran through me, and the hair on the back of my neck stood up again. The picture was of a Colonel John B. Gordon. The face was not unknown to me, I knew it well as I shave it every morning.” Jeff noted that in the caption that Gordon was identified as a general, whereas in the article Gordon was identified as a colonel at the time of his wounding. Gordon apparently had survived the battle at Antietam.

Keene Writes about His Past Life Recall Experiences

Jeffrey Keene eventually wrote a book on his past life as John B. Gordon. In his book, Jeff describes how he later retrieved memories of his life as John B. Gordon. Jeff also describes habits and traits he has in common with Gordon. These include a preference to stand with arms crossed; similar clothing tastes, and scars on his face and body that seem to mirror Gordon’s battle wounds.

Read: Someone Else’s Yesterday: The Confederate General and Connecticut Yankee: A past Life Revealed Apr 15, 2003, by Jeffrey J. Keene

»Past Life Story of John-B. Gordon

Get the 3-in-1 Discount Bundle!

get the course bundled

Get Both Courses at a Discount Price!