Ghosts of the SS Eastland 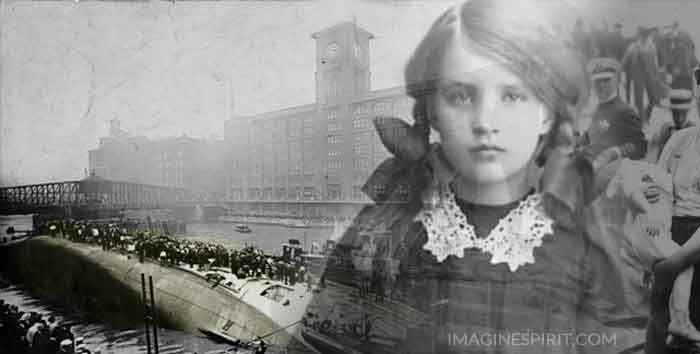 The S.S. Eastland’s ghosts, haunt Chicago’s waterfront even after one-hundred years after the tragic capsizing event.

Interestingly, few people outside of Chicago know of the S.S. Eastland calamity. Even more are unaware that the fatal disaster is the greatest single loss of life of any ship on the Great Lakes.

The horrific event occurred when the Eastland, rolled over on its side while docked on the Chicago River. Hundreds of men, women and children on board drowned within minutes of the ship rolling over. Not long after, the area of Chicago’s Clark and Lasalle Streets report ghostly activity.

It Was a Beautiful Day for a Picnic

In the early morning hours of July 24, 1915, the S.S. Eastland, docked between Clark and Lasalle Streets, waited for its passengers to arrive. The Western Electric Company had chartered the Eastland to transport employees, some entire families, to a company picnic in Michigan City, Indiana.

The S.S. Eastland Steamer had Problems from the Start

The S.S. Eastland steamer, built in 1902, had the capacity for only 500 souls. Designed for lake excursions and transport produce on the return trips to Chicago, the Eastland had design flaws. The top-heavy Eastland steamer rolled and listed frequently when overloaded. Unfortunately, employees of the Western Electric company bound for the festivities that day, knew nothing of the ship’s instability.

War raged in Europe but on the morning of July 24th excited passengers pushed their way up the gangplank of the Eastland. Upper decks became crowded within minutes and the rest of the passengers crammed the decks below happy to be out of the morning chill. By 7:10 am, over 2,500 passengers filled the ship.

Just after 7:15 am, the crew became concerned as the boat started to list to port facing away from the pier. Water pumped into ballast tanks could not stop the list. and the vessel continued its alarming roll.

Panic and Terror Aboard the SS Eastland

On the upper deck, panicked, adults, many holding onto children and infants, spilled into the water. Others jumped for their lives. Onlookers were horrified as hundreds of people began to drown. Panicked passengers below deck climbed out of gangways and windows on the starboard side as the ship continued to lean toward port.

Other passengers found themselves trapped inside by water. Additionally, pianos, heavy bookcases and tables slammed into adults and children killing some instantly.

Just 58 minutes after boarding had commenced, the Eastland rolled over on its side settling into the shallow river bottom. Not surprising, a few onlookers jumped into the river to assist those floundering in the water.

At the same time, nearby boats also rushed to help but by then it was too late to save scores of victims. To add to the chaos, screams heard inside the hull prompted rescue workers to clamber aboard and attempt to cut through the Eastland’s thick plating with torches.

When the hull was finally breached, only a handful of passengers were still alive. The happy news was that one entire family was rescued.

…and then movement caught my eye. I looked across the river. As I watched in disoriented stupefaction a steamer large as an ocean liner slowly turned over on its side as though it were a whale going to take a nap. I didn’t believe a huge steamer had done this before my eyes, lashed to a dock, in perfectly calm water, in excellent weather, with no explosion, no fire, nothing. I thought I had gone crazy.

City officials, arriving at the wharf, swiftly ordered makeshift morgues set up. It was decided that a large abandoned military armory* would serve as one.

For hours, boats circled the water near the Eastland looking for bodies.

This was a slow agonizing process as there were countless bodies needing to be pulled from the water. For several days, deep sea drivers struggled through mounds of debris, hoping to locate any additional bodies trapped on the river bottom. It was dangerous work.

More than once, a diver would have to surface quickly or die when oxygen tubes became twisted and air was cut off. Thankfully, no further fatalities occurred to add to the number of dead.

Recovered bodies were loaded on trucks, ambulances, and horse and buggy lined up waiting to move them to the temporary morgues. By mid-afternoon, a mass of unidentified bodies lined the armory floor. Next, came the grim task of identifying the dead and reuniting families for burial.

Of the estimated 2,500 passengers and crew members on board, 844 people lost their lives, including crew members and 22 entire families.

Shortly after the disaster, the Eastland was raised to be sold. It was subsequently moved near the Halsted Street Bridge. It was then that rumors the ship was haunted began. At night, people crossing the Halsted Bridge near the Eastland ship, always did so hurriedly.

The assigned caretaker, Captain M.L. Edwards (not the Eastland’s captain), lived on board the ship. Edwards claimed he was awakened nightly by moaning sounds and loud banging noises. For sanity’s sake, he attributed the sounds to the boat’s waterlogged damage.

In fact, Edwards later reported to newspapers, he was very glad to move off the ship. In December of 1915, the US Navy** bought the ship and it served in various naval capacities for the next three decades. Finally, the rickety Eastland met its own death in 1945 when sold for scrap.

Pedestrians walking past the disaster site, report hearing sounds of loud splashing often accompanied by chilling screams and moans. Incredibly, when peering into the river from the overlook, the water is calm.

Additionally, frequenters of riverside cafes that line the disaster site, occasionally witness inexplicable surges of water flood the river walk. Could this be a residual replay of water thrown on the lower docks when the Eastland rolled over?

Furthermore, paranormal claims from folks taking a casual stroll along the river are often reported. These include seeing unusual activity in the water. Upon closer inspection, they’re shocked by the reflections of faces with lifeless eyes staring up at them.

The armory was eventually demolished and new structures were built the site. The Oprah Winfrey Talk Show (Harpo Media Productions), inhabit one such building.

Staff members, security guards, as well as maintenance workers, claim that ghosts of the disaster victims from the Eastland, roam the building. Several employees report encounters with a woman in a long, gray dress.

The ghost frequently wanders the corridors of Oprah’s studio. If approached, she immediately disappears. Some witnesses believe the woman is the specter of a mourner who came looking for her family. Whereas, others sense that she’s drowning victim.

The footsteps sound like a large group of people climbing up the lobby staircase when none are to be seen. Furthermore, doors located nearby, open and close by themselves–some slamming. Other times, loud shouting is heard with no apparent outside noise going on.

Disasters of such magnitude often leave a paranormal energy signature in the area where the event happened. Undoubtedly, the site of the former armory hosts residual replays of the 1915 disaster.

In 1997, Sightings, a paranormal the television show, filmed an episode at the Excalibur Night Club located on Dearborn Street. The night club happens to be incredibly close to where the disaster took place.

A little girl in old-fashioned dress, is sometimes seen peering over the railing in the club’s Dome Room. Additionally, a bluish-colored shape is occasionally spotted floating up the stairs. (Whether these incidents are related to the Eastland disaster, or belong to a part of Chicago’s violent criminal past is undetermined.)

*An interesting side note: The armory location would later become the home of Harpo Studios (Oprah Winfrey’s multimedia production company).

**The author couldn’t locate additional accounts of shipboard haunting after the Navy took over the Eastland (renamed U.S.S Wilmette). However, numerous books on the S.S. Eastland disaster exist. Perhaps one of them reveals stories of subsequent haunting.

4 thoughts on “Ghosts of the SS Eastland”